Menu
0
No products in the basket.

A summer wedding in Henley On Thames 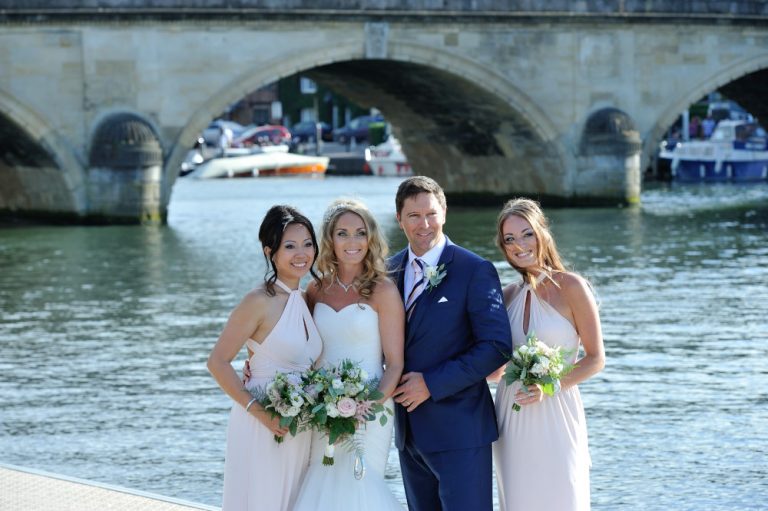 Ashleigh and Garth were looking for a country chic style.  The flowers used were mainly white and ivory with touches of blush pink.  They included roses, lisianthus, freesia, astilbe and astrantia, with populous and asparagus fern.

Here’s Ashleigh & Garth’s wedding story in their own words as well as photos of their stunning wedding.

The Proposal
The proposal took place on a surprise weekend away in Siena, Italy, all organised by Garth.  We climbed the clock tower in Piazza del Campo, taking in the Tuscan scenery on the way, and at the top Garth got down on one knee and asked me to marry him with the most beautiful engagement ring I’ve ever seen!

The Bridal Party
The party was small but perfectly formed with just my Mum, my sister April and friend Le-Ann.  We also had some help from Garth’s daughter Amelie who was our flower girl.

The Big Day
The big day was in our home town of Henley on Thames and we wanted the day to be filled with fun, friends and family and also be lovely and relaxed… all stress and Bridezilla behaviour was strictly forbidden!
The ceremony took place in Henley Town Hall, with everyone being greeted by a Gurkha bagpiper, which was a nod to Garth’s military career and my Scottish roots.  After the ceremony guests headed to The Three Tuns in Market Place for a champagne reception, whilst Garth and I, along with the bridesmaids went down to the river Thames for photos.
We all enjoyed a delicious dinner followed by a dessert buffet (which was very indulgent) in the Stable Bar at The Three Tuns, followed by music from John James Newman and DJ Dave Doubledecks!

Flower Story
I had a really clear vision for the flowers I wanted but I’m not the most creative person in the world! I have walked past Sonning Flowers many times whilst shopping in Reading and have always thought the shop looks beautiful.  I had spoken to a few florists in the area but once I met with Andrea, I was sure Sonning Flowers was the right choice for our wedding.

Andrea listened to what I wanted and also came up with some really great suggestions of her own, which were all exactly in keeping with the look I wanted to achieve.  Our venue at The Three Tuns was perhaps a little unusual but she and the team worked wonders, dressing oak beams, providing trees for the garden, table decorations etc.  By the time the team had finished the venue looked incredible!  The buttonholes and bouquets were even more impressive and the Sonning Flowers team worked wonders at the Town Hall too.  I genuinely could not have been more pleased with the flowers, everything was perfect, fairly priced and Andrea worked with me to deliver everything within budget.

The day after the wedding, Garth and I gave the larger arrangements to a local nursing home where they were enjoyed by the residents there too.

Honeymoon
…. Is yet to happen

Put simply, Garth and I had a wonderful day and thank you so much for making our special day just that little bit prettier.

The team at Sonning Flower wish Ashleigh and Garth all the best with their future as Mr & Mrs.

Flowers for Valentine’s Day for delivery in Reading, Newbury and Kingsclere

This website uses cookies to improve your experience while you navigate through the website. Out of these, the cookies that are categorized as necessary are stored on your browser as they are essential for the working of basic functionalities of the website. We also use third-party cookies that help us analyze and understand how you use this website. These cookies will be stored in your browser only with your consent. You also have the option to opt-out of these cookies. But opting out of some of these cookies may affect your browsing experience.
Necessary Always Enabled
Necessary cookies are absolutely essential for the website to function properly. These cookies ensure basic functionalities and security features of the website, anonymously.
Functional
Functional cookies help to perform certain functionalities like sharing the content of the website on social media platforms, collect feedbacks, and other third-party features.
Performance
Performance cookies are used to understand and analyze the key performance indexes of the website which helps in delivering a better user experience for the visitors.
Analytics
Analytical cookies are used to understand how visitors interact with the website. These cookies help provide information on metrics the number of visitors, bounce rate, traffic source, etc.
Advertisement
Advertisement cookies are used to provide visitors with relevant ads and marketing campaigns. These cookies track visitors across websites and collect information to provide customized ads.
Others
Other uncategorized cookies are those that are being analyzed and have not been classified into a category as yet.
SAVE & ACCEPT